Descend the elevator within the Maintenance Room

The Confusion Ending is the ending obtainable by taking a very unorthodox path that gets you, and the Narrator, lost from the story, leading to a long sequence of events trying to find it incorporating multiple resets.

This ending is in the HD remake and Ultra Deluxe.

Exit Stanley's office. At the 2 doors, pick the one on the right. Continue through the Employee Lounge, then enter the door on the left as designated by the Narrator. Proceed to the elevator on the left instead of walking forward, and press the button within the freight elevator. This will set the ending on its course. Since all other endings are unavailable during this one, it is impossible to exit it once starting.

When the elevator arrives in unknown territory, the Narrator, having no idea as to where he and Stanley are, will "try" out a few different avenues to attempt to return to the main story. After consulting his script, he will finally settle on going through a garage door and down a set of stairs, leading to an overhead view of the monitor room from the Freedom and Countdown Endings. Claiming the room is a massive spoiler, the Narrator will quickly try to salvage the situation before giving up. He will then restart the game, telling Stanley not to wander too far off track this time.

While the game seems to have returned to normal like any ending, once Stanley returns to the Two Doors Room, there will be an additional four doors. The Narrator, very confused by the change, questions Stanley if he had done something to the story. He will then open all six doors at once so they can "find the story". After exploring the new hallways, the Narrator will become frustrated and restart the game again, hoping for a better outcome.

Upon returning to the Two Doors Room, all the doors will have vanished, leaving an empty dead-end room. The Narrator proposes that the story must be back where they came from, and directs Stanley back towards his office area. Before long, a new hallway appears, which excites the Narrator, who believes the story must be just around the corner. Upon finding another dead end, they retrace their steps back until they enter a new location; a desolate wooden building, not unlike the storage area from the demo. The Narrator, now completely confused as to what to do or where they are, defeatedly declares that Stanley has won, complete with a splash screen and stock crowd applause. He quickly changes his mind, however, deciding it wasn't a fair victory. He then restarts the game again, not wanting to stay in the wooden building any longer.

Upon starting back in Stanley's office, the Narrator states that he has employed the help of The Stanley Parable Adventure Line™, a mystical and seemingly-endless yellow line that will help keep them on track with the story. Unfortunately, things quickly go awry as The Line™ detours into further unknown territory.

While following The Line™, the Narrator begins to ponder philosophically about the nature of destinations and journeys and how they correlate, his ramblings getting more and more convoluted before he eventually catches himself. He decides to put on a jaunty march tune to accompany Stanley's journey. As they march through new areas, The Line's™ path begins to get more and more exaggerated, going across walls, going in circles, doing loop-de-loops, etc.

Eventually, the Narrator spots a fern and cuts the music off. He tells Stanley that the fern will be very important later on and tells him to memorize it. Progressing further, they end up back in the main office area, with The Line™ now crossing over Itself™. Bewildered, the Narrator starts to question The Line's™ reliability before they end up back in the overhead area of the Monitor Room again. Frustrated, the Narrator scolds The Line™ before restarting the game once more.

Stanley starts to follow The Adventure Line™ once more, but the Narrator stops him in his tracks by closing the door that leads to the rest of the office. He says that they don't need The Line™ and should forge a new path of their own. He opens a new door into a set of hallways, excited about the new adventure he and Stanley will go on. It isn't too long before The Line™ busts through the ceiling and starts loop-de-looping across the hall. The Narrator tells Stanley to ignore The Line™, which seems to understand and eventually slinks back into the ceiling and disappears. They then find themselves in a circular room with two doors and spend a moment walking in circles, deciding on their next course of action. Using inane logic, the Narrator concludes that the right door must be the right choice.

Inside is a dark room with a giant electronic schedule board upon the wall. It lays out the groundwork for the "Confusion Ending", listing the events that Stanley and the Narrator have experienced (i.e. the wooden building, The Adventure Line™, the various restarts, etc.) and events yet to come (i.e. deteriorated office, finding a bookstore, etc.) which eventually end with the Narrator disappearing and Stanley dying.

Perplexed and rightfully horrified by the realization, the Narrator retorts against the schedule, saying he won't restart the game again to avoid the future outcomes. It is then that the timer on the board abruptly stops. The Narrator begins to talk to Stanley about the situation, suggesting that they wait for now and that they'll eventually find out whether the journey or destination is more important, before a loud alarm buzzer cuts him off and the game restarts.

After this restart, despite what is stated on the schedule board, the Confusion Ending is over and gameplay returns to normal.

If Stanley is holding The Bucket, The Narrator will instead be happy he found his way to the room. The room is far different than in the normal version, now with green walls and a banner that says "We care about you Stanley!". Many of Stanley's "friends" are also here, such as Stanley's Computer, a pencil sharpener (possibly meant to represent Employee 432), the Baby from the Baby Game, the mannequin from the Apartment Ending, the Fern and The Stanley Parable Adventure Line™ from the Confusion Ending, and the Broom Closet.

The Narrator laments that Stanley has been neglecting the "fan-favorite" characters in favor of The Bucket. He insists they instead follow The Adventure Line™, playing the same song from the Confusion Ending as well. He cuts it off as Stanley enters a broken room similar to the ones found in the Games Ending. He plays a clip form the Broom Closet Ending, laughing at the classic joke.

But, The Narrator says that, in order to enjoy more content exactly like the old content, Stanley will have to get rid of The Bucket. To do this, he introduces a brand new character: the Bucket Destroyer. He realizes the hypocrisy of it also being a new character, but defends himself by saying it is already so "fleshed-out with so much character" it will fit right in anyway.

Eventually, the Bucket Destroyer explodes. It floats in a white abyss as the Narrator laments on its death. 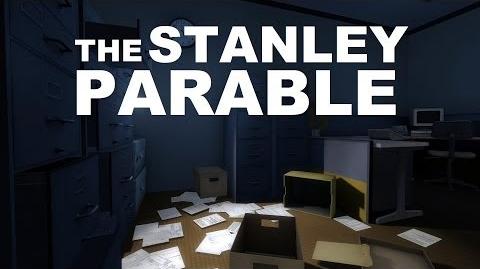 The Stanley Parable with Confusion Ending!