For some reason, the number {8} (eight) has been a running joke seen throughout The Stanley Parable. Below is the list of eight references in-game: 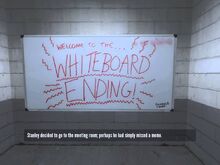 Reply to fan letters and e-mails

A possibility for the meaning of Eight is it resembles an infinity symbol (∞) if turned on the side. This is perhaps in reference to The Stanley Parable's tagline "The End Is Never...". It could also be a possible reference to Bungie's use of the number 7 in the Halo series and/or the frequent appearances of the number 47 in the Star Trek franchise and other similar recurring numbers in media. Also, because of the Metacritc coincidence, there could be even more theories about the {8}.