View source
watch 01:36
We're Getting Mutants in the MCU - The Loop
Do you like this video?
Play Sound

The Executive Bathroom is a bathroom used only by Stanley's boss. It features a large window, a plant in the corner, several paintings, blue wallpaper and some magazines next to the toilet. To the left of the toilet is a 4-line quote that, at first, appears to be a rhyme but concludes without any sort of rhyming. The quote changes each time Stanley enters the room.

The door is unlocked after you beat the game for the first time. Sometimes the door will be unlocked and other times it will not (but it seems to be always unlocked when you choose the right door at the beginning).

Following The Stanley Parable: Ultra Deluxe Patch 1.07, meeting certain conditions will cause the Executive Bathroom become the New Memory Zone, and the mirror will turn into a sort of scene selection menu where you can click on photographs pasted onto it to revisit a few scenes that could otherwise only be viewed once.

One poem on the wall of the bathroom.

The Richest Crime poem on the wall.

The Stealing Money poem on the bathroom wall. 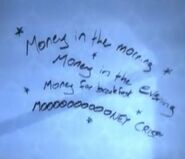 The Money Crisp poem on the bathroom wall.
Community content is available under CC-BY-SA unless otherwise noted.
Advertisement