View source
watch 01:36
We're Getting Mutants in the MCU - The Loop
Do you like this video?
Play Sound

This is a list of all glitches in The Stanley Parable.

To perform this glitch, the player must reach the Monitor Room and then press the lightbulb button. Then the player can climb onto the chair and then onto the desk. The player can fall to the floor without dying. This glitches out the game but the Narrator doesn't respond. Therefore, the player must manually restart the game. In the The Stanley Parable: Ultra Deluxe, the softlock is replaced with the Bottom of the Mind Control Facility Ending.

To perform this glitch, the player has to reach the Warehouse, crouch, get to the edge of the platform, and then go all the way to the fence. Then the player can drop over by the boxes, and still survive. If the player falls off the boxes, even though the player hasn't reached the ground, the game still thinks the player has died, and results in Stanley's death.

To perform this glitch, the player has to get the Office where the first turn is a left turn instead of a right turn (see Randomized Beginnings). While in the elbow turn, if the player tries to open and close the non-labeled doors, they will turn invisible. Then if the player performs the Escape Pod Ending and goes back to the turn, the invisible doors will break the ending.

To perform this glitch, the player has to first perform the Escape Pod Ending. Then the player has to get all the way back to the starting point, but instead of going through the open door, try to do the Out of Map Ending by climbing on the desk and going out of the window. There is no invisible wall and the player will fall onto the invisible floor. The Narrator won't do anything because he is disabled at this point, and the player is stuck there unless they restart the game manually. 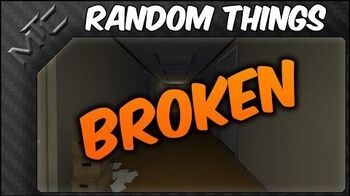 The player has to be lucky to get this glitch. It is where in the regular Office, if the player tries to get to the Two Doors Room, sometimes it will be blocked by a wall, like in the Short Start Glitch. The reason for this is because sometimes the "linked_portal_door" entity in the game files fails to open, resulting in the wall. To fix this glitch, the player has to enable the developer console and enter "ent_fire linked_portal_door open" to remove the wall. Sometimes this happens during the first time the player plays the game. A side effect to this glitch is that Stanley's room door will still be open.

In order to get this glitch, you must pick up the bucket, then go to the Maintenance Room. Go down the lift and follow the Narrator all the way to the room with the Bucket Destroyer. Take a right turn to the blocked off catwalk and climb up the chairs. From there, you can either fall over the blockage onto the other side of the catwalk or fall over the edge into the black void below. Both achieve the same thing. You will be stuck, the Narrator will not react, the cutscene will not play, and you will be stuck until you restart.

Behind a chair softlock

Follow the same steps for the Bucket Destroyer Room softlock up until the room with your friends. Climb up onto the chair with your computer on it, and simply walk off the edge behind it. You will be stuck due to the most stupid oversight in the history of oversights.

On the top back right wall of the Whiteboard Ending room, there is a glitched polygon that appears to be a shadow. This is nothing more than a graphical glitch, and has no effect on gameplay.

Getting stuck beneath the Bucket Destroyer in The Stanley Parable- Ultra Deluxe
Bucket Destroyer Room softlock
Community content is available under CC-BY-SA unless otherwise noted.
Advertisement