Down the staircases after the Meeting Room

The Mariella Ending (also known as the Insane Ending, Crazy Ending and Dream Ending[1]) is the ending that occurs when you go down the staircase following the meeting room instead of up to the Boss's Office.

This ending is in the original mod, HD remake, and Ultra Deluxe.

Exit Stanley's Office. At the 2 doors, pick the one on the left. Once you get to the staircase, go down to the basement.

Stanley will find himself in a series of usually-darkened rooms of varying description. The Narrator states that Stanley, having second thoughts about facing his boss, retreated to the basement out of fear of being called crazy or, worse, fired.

As he walks through the seemingly-repeating rooms, Stanley begins to notice things about himself, such as his inability to see his feet when looking down, and the inexplicable occurrence of doors shutting behind him whenever he passes through them. His anxiety rising, Stanley manages to convinces himself that he's experiencing a dream, and imagines himself floating through the stars to calm his nerves...

Stanley's immersion is broken when he realizes all of this is being dictated by a voice in his head, a voice he had never noticed until this moment. The voice states that, though he tries to deny it and convince himself otherwise, Stanley is as awake right now as he's ever been in his life. Thoroughly freaked out yet still somehow-composed, Stanley tries to prove once more that he is dreaming by attempting to wake himself up. He closes his eyes gently, and thinks about how normal his life is, silently yearning for his wife, his menial job, and for his life to return to the way it had been before he fell asleep.

Upon opening his eyes and realizing he's still standing in his office, Stanley snaps. He starts screaming, begging for help, shouting "I AM REAL! I MUST BE!" at the top of his lungs. At this point, everything goes black.

The plot of the story then abruptly switches from centering around Stanley, to a new character; a woman named Mariella who, while walking to work one day, spots a man reminiscent of Stanley talking and screaming to himself before collapsing dead away on the sidewalk. Mariella spends a brief moment contemplating the strange man, relishing in her sanity, before rushing off to call for an ambulance and attend her important business meeting.

If Stanley is holding The Bucket, everything is the same, up until he assumes that he's crazy. At this point, he looks down at the bucket and asks it if he is crazy, but gets no response. Stanley calls this strange, as the bucket is usually a source of guidance and wisdom for him in difficult times like these. Stanley holds the bucket close to him, but doesn't feel the familiar sense of reassurance and comfort he felt previously.

This is when Stanley realizes the bucket is not his, and that it is instead just a regular, everyday bucket, or someone else's bucket. He questions how he has ended up with someone else's bucket, and suggests that, without the psychologically-grounding presence of his bucket, he may start hallucinating. He also notices that the rooms he is wandering through keep repeating.

Stanley starts to feel himself floating off of the ground. He exclaims that he has gone mad, and that he must find his bucket. In the distance, he hears his bucket calling to him through the narrator's voice. He proceeds to rush forward from room to room, passing by many buckets that he knows are not his. The bucket calls out again, before Stanley freezes in his tracks. The voice of the bucket is described to have been coming from inside him all along. Something incredibly painful happens to Stanley, causing him to fall over and pass out.

The plot of the story then once again switches from centering around Stanley to Mariella. The details from this point are similar to the original ending cutscene, except Mariella is described as having her own bucket. After witnessing Stanley collapse on the sidewalk, she attributes his madness to his lack of a bucket, saying that his rants "could all have been prevented if he had taken his bucket with him" and that "perhaps he didn't even realize he had left his bucket at home in the first place". She hugs her bucket and backflips away, due to the "myriad of confusing problems she would soon have to confront at work, for which her bucket would provide absolute guidance and total clarity on everything".

Ending in the original mod 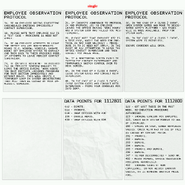